Skip to content
When you have friends that like to play prank on you either near you birthday or you birthday itself, surely one will be prepared at anytime. Wanna surprise me is not really that easy especially when I have predictable friends. But nonetheless, good effort of them, might as well just play along. Although I did not expect that they’ll be celebrating a ‘lil earlier but there weren’t any other time suitable since my schedule is really pack this week.
They started the ‘surprise’ after I came back from badminton. I actually was like deciding to go or not at first but then exercise is what I needed to sweat it off… my sixth sense are kinda good. So after dropping me and May Form off, the van somehow drove away but the sound was indicating that it was just stopped at the junction. The sound of the van is just too loud. I even told May Form why they van is not moving. Suspicious point #2. Suspicious point #1 was normally after badminton, sp and cf will be going home b4 us since they house is so much nearer than mine and we are in different neighborhood. But I just kept it to myself. There are some other points as well but wasn’t very much obvious.
Back to house scene,
MF opened the door since I only took my phone and water bottle with me. Then walked in the house and Mike was holding the ferrero rocher bouquet and wished me. Now, he was the only one in the living room and was hiding at a corner beside the door. One do not simply hold a bouquet of whatever and stand there waiting for something. Then he was like asking the rest to come out. They missed the timing to come out… haha… It was after awhile they came out and tried to sing the birthday song.
You know how in movies when they do surprises? This was just one of those off timing and kinda fun to watch when you’re the one on the receiving end.
But when everybody came out, the was another commotion going on at the car porch. Peter who is having his birthday 1 day later than me got some ‘sprinkling’ water. Pails of water were ready to ‘baptized’ him. He totally caught off guard. Then the whole scene went outside. Not bad. He’s the only one couldn’t come inside the house as he was all drenched. Mike came in during the second half of the commotion since the door was closed to ensure that Peter doesn’t come in. Mike with wet, dirty feet walked in to the premise and end up doing cleaning punishment.
They tried to ‘baptize’ me as well but smart me keep on holding on to the phone and they were kind enough not to force ‘baptize’ me… *safe*… Gary tried to take my phone away using the same line as I used on him last year…. ‘your iphone got what new games?’ (i know it’s grammatically wrong) HAHA epic.
Off with birthday song.
Was asked to make 3 wishes but honestly, I didn’t make them ’cause all these while I already have my wishes unfulfilled until now. Should I post here? If you know me well, you would know.
1. Mini Cooper JCW
2. Travel while working (note: not the other way around)
3. ??? (not really a secret but good to leave some vagueness)
Cut cake, eat cake but with style. No more conventional cut cake and place on tissue or plate. We just dig in the cake with our forks and spoons. No waste, no fuss.
Of course the whole event did not end if revenge was not made. *splash splash splash, run run run*
The nicest moment was when pp poured away the bucket of water and was going to take the empty bucket away from anymore evil schemes then Peter came back trying to scoop somemore water not knowing pp was there. Then the epic moment when pp point her finger to Peter warning him not to splash her and chased him to get the scooper back. The whole scene was just too funny. 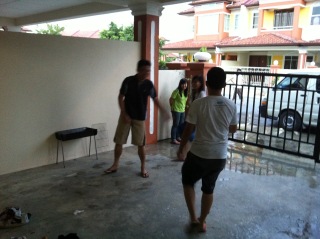 Just before Gary and sp leaving the gate, Peter got his ammo and did a last splash on them. Sp was partially wet with the phone having some drops of water ’cause Gary did the ‘hero rescue beauty’ move. But as Sp’s nature, her loudspeaker went off.
When one plays too big, this is what happens: young, wet and wild?
(taking down evidence)

This is what I meant by owning stuff toy is not limited by age. They couldn’t get the original one for me since 1st, it’s need shipping; 2nd, it is in USD! But one day I WILL get the whole collection!
Somehow whatever name I give to my stuff toys, they’ll get teased.
This particular stuff toy accompanies me when I’m studying ’cause it’s just such a good headrest…
Thank you all for preparing this surprise and getting all the things for me. I really like the Ferrero Rocher bouquet as well as my lovely ka-ping!’s portrait. Cuteness overload.
Thank you, merci beaucoup, 谢谢，감사합니다, どうもありがとうございました!
Dororo, Xiao ai ren, Ah Matt, Sui zai, Oniichan, da ge, dai lou, mike-cou, da jie, chai shia, leng lui, and the chicken family (mf, pp and cw)!

-never uncover one’s plan even when you know it-