The land which they say it’s the land of hornbills. I’m here! Stepping on this soil for the 2nd time after 8 years. Wow… that was long. How time flies. 8 years ago had lots of changes which is the entire-kinda-important-part-of-growing-up. Now it’s for another reason to be here.

Who would have thought of my ‘lil wish could come true though it really literally took some time. It wasn’t what the feeling I thought it would be.

The experience was all making me in awe. Thank God for kind, friendly people from the moment I step out of Kuantan.

For the 2nd time I get to drive to KL… but not all the way this time… only up to Karak highway… The boring part left to me to drive but ’cause of that, we manage to reach KL earlier than expected… hehe… I still drove within limits.

Rushing, rushing and more rushing… The past few days are the most stressful moments in my life…

All the rush was worth it… Reaching KL just within the time frame. Anticipation was raising, anxiety follows… Good thing I wasn’t the one driving on KL road, if not road rage would happen. Good thing there wasn’t much jam on the road we’re traveling. Finding parking wasn’t a breeze but still manage to find 1.

1st stop! the toilet… LOL… this is to ensure that any transaction later can be done smoothly.

We’re suppose to look for this particular shop but while walking we spotted Mac City instead of going to Machines. Rather than more walking and looking for Machines, we just went inside Mac City. Went into the shop to show which is the laptop that I want. Certainly did not purchase just like that. If that happens it’s totally a miracle day and Malaysia might experience snow for the first time. Well, service was good. Don’t know how their after service would be like.

After explaining the laptop and stuff, my father just casually and I mean casually say ‘ok, we’ll take one of this’ Thus mark the happiest moment at that time.. Woohoo! On top of that I don’t have to pay. Initially I would have to pay but with the handy card, my problem is solved! *with dinner bills on me* but that’s ok… after all it’s only a faction of what I have to pay for an expensive Apple. 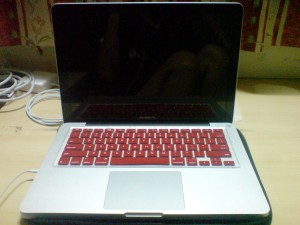 They gave free protector and sleeves.

The next day gotta fly to the land of hornbills. Love the adrenaline of speed when the plane was about to take off… I just have a need for speed.

What happen next is another whole lot of story…