Skip to content
I’ve been reminded why I don’t really like to take public transport, especially on land. After months of not taking the bus for long distance travel, I have my chance of reliving the moments. Initially I thought of taking the plane, but after comparing just the price, might as well save the money for something else. It’s not I’m in a rush or anything.

Even though I have like a whole day unscheduled, still letting time pass without doing anything productive is kinda annoying.
So here’s how my day spent (wasted):
8.00am – Finally got out of bed, wash up, get ready, pack up
8.30am – Chilling while waiting for my ride to get
9.25am – Left to Putrajaya Sentral
9.45am – Bought bus ticket and have breakfast
10.00am – Playing game on iPad while waiting for my 11am bus
11.00am – Time to leave Putrajaya Sentral. Went for a joy ride to Puchong then to Perkeliling bus station
12.00pm – Arrived at Perkeliling bus station and sit around.
12.50pm – Leaves KL/Selangor.
3.30pm – Reached Terminal Sentral Kuantan
3.45pm – Reached home. Clear up after the dogs and bathe them
5.30pm – Dog grooming session
6.15pm – Life goes on with work
Practically my whole morning was just waiting and waiting and waiting. The only thing that could keep me entertained was Sky Force. Even with that, I got bored after a few games. At least in the bus they played a movie. 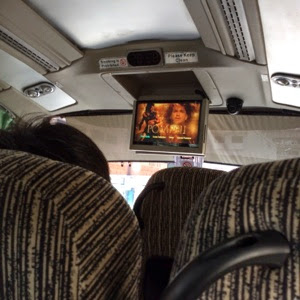 When the journey started, my stomach began to churn. Note to self: No dairy in the morning even after food. So there I was psycho-ing myself not to think about the stomachache and just focus on the movie. Well, the audio wasn’t that audible and no subtitle. I got the front seat so it’s still not that bad toknow what is going on. Even when the bus was on a toilet/pump petrol break, they paused the movie too! How thoughtful. The movie ended when there was another hour or so before reaching Kuantan’s terminal.
How was the movie?
Err… With my mood already half gone with the time, the ending of the movie just left me hollow.