Skip to content
*Warning: Pictures below might be eeky to view. Heavy picture content.*
Exactly 1 week ago I went to KLCC Aquaria. Whee~~ Of the so many times that I’ve been to KL/Selangor, this is my first time visiting this big aquarium. The last time that I went to an aquaria was in Langkawi I think 2 years ago.
One of the plus points is that I only need to pay student price!!! Student card ftw. With student card it’s only RM30 as compared to showing Malaysian IC that will cost you RM38. Why not save the money when you can. At least you can buy a drink after. #beingcheapskate
Anyway, the whole tour around Aquaria KLCC was about an hour. Depends on how fast or slow you look see look see.
Didn’t manage to catch the feeding time though. Timing was off, but nonetheless, we get to see other stuff… Always having unusual sighting when I’m around.
Upon stepping into the entrance, you get greeted by piranhas. They even have a video showing you piranhas having their meal and the aftermath of it. You don’t even wanna try putting your finger in.
There’s also a corner where you can touch starfishes, sea cucumber, and some horseshoe crabs. Me no touchy fishy water. Hence, just move along.
They have some interesting facts about the fishes, mammals, reptiles, and any living creature that is on display.
Stumble upon this electric eel. For a long time I was actually looking at its tail only to find the head is facing the side of the tank. 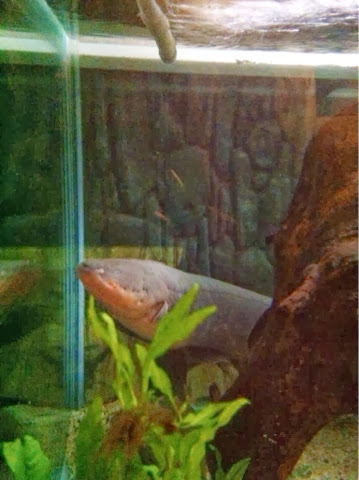 It’s kinda creepy and it does look like a snake/log. Take a few more of these and you can create Frankenstein (according to I, Frankenstein) if you want to.
Then comes… 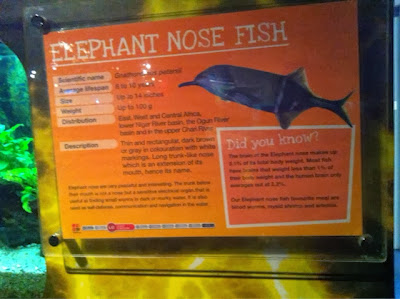 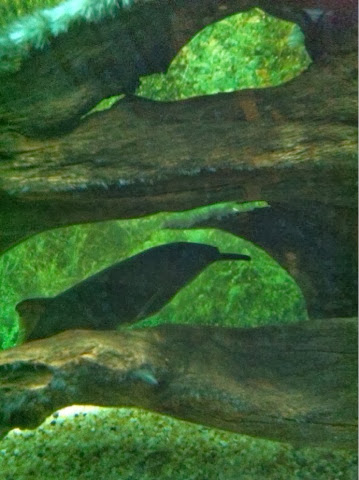 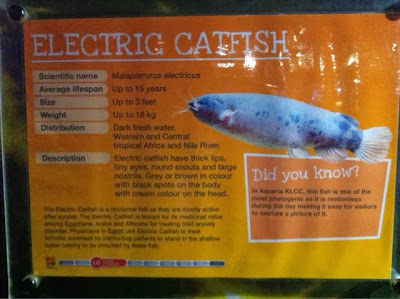 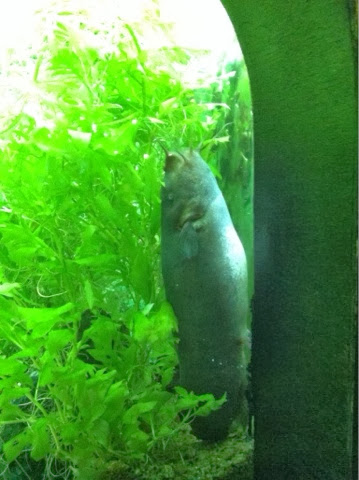 Sorry. But this just creeps me out. It looks ugly! So sorry to marine biologist out there. I don’t really know how to appreciate them.
Along the way, I see a HUGE rat!!!! 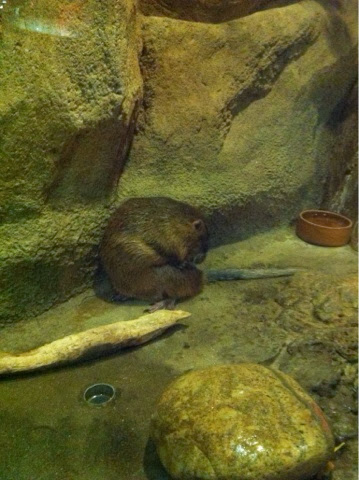 Yes. It’s a RAT. Rodent. Water rat to be precise. Something furry to see after some visual disturbance. 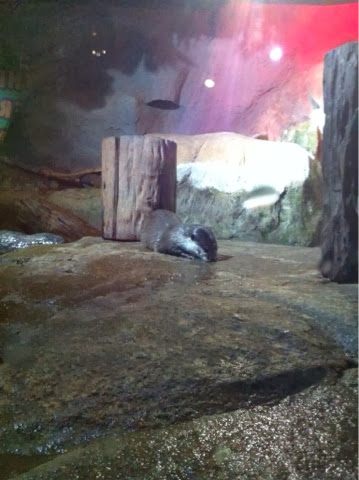 Otters are so cute! Manage to catch a glimpse of their feeding session. But as usual, there will be a crowd. 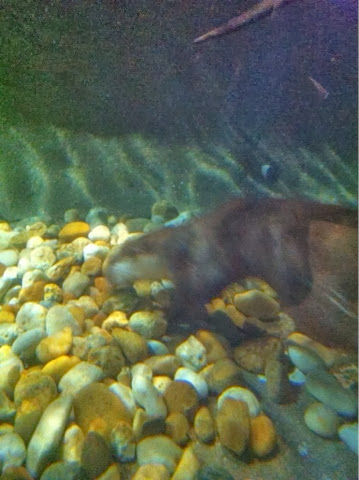 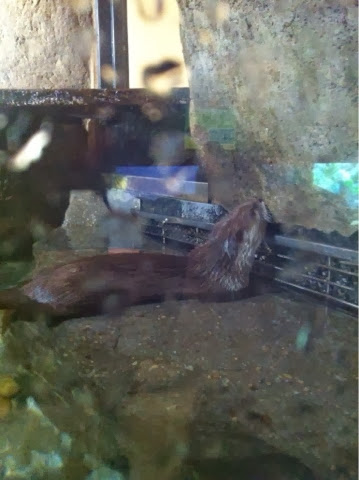 There was one particular otter was like raving in a corner. It was more like trying to flick the water from its body. Each time the whiskers touch the water even for the slightest bit, it will start raving again.
Then came to the part where I dislike the most – Reptiles and insects.
There is a ginormous millipede that hails from the land of Malaysia. OMG!!! They have not only 1 but 2 in 2 separate glass box! and meal worms both small and big!
Don’t expect me to take any pictures of those gigantic Malaysian millipedes. It’s not happening.
Snakes are still fine by me. 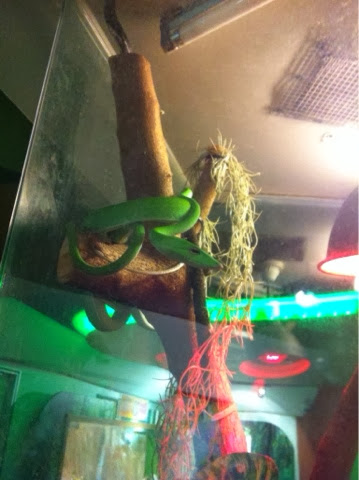 They are just like statues. This one in particular did not even move one bit.
Then we have other reptiles like gecko, newt, and somewhere along that family line. 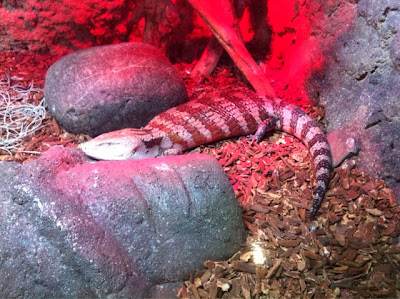 After that section, it was back to fishes. Relieved.
Was greeted by a school of fish and some fake thunder and flashing lights. Apparently it was supposed to resemble Amazon jungle / river. 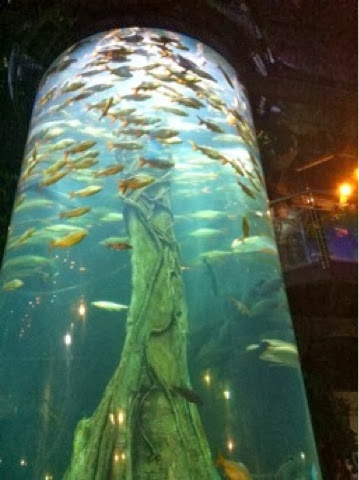 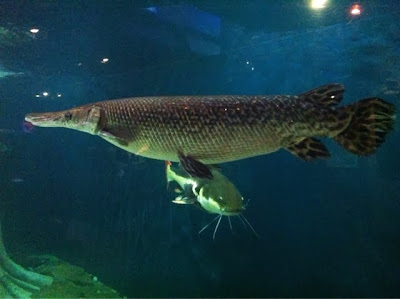 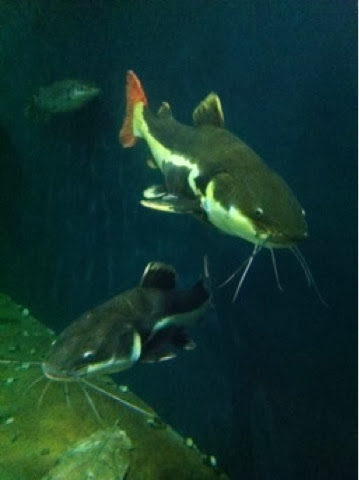 These fishes are not that small. They are huge. Like the ones you can see in the series River Monster, hosted by Jeremy Wade. 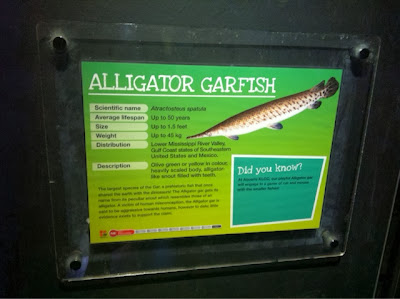 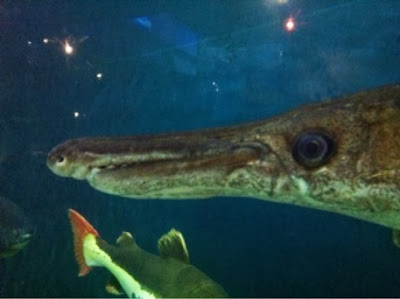 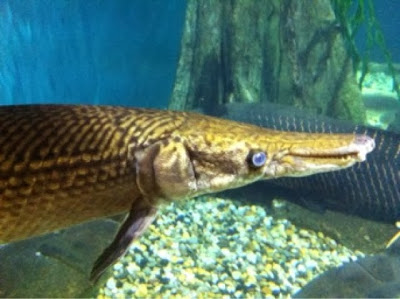 You can see why is it being called an alligator fish. 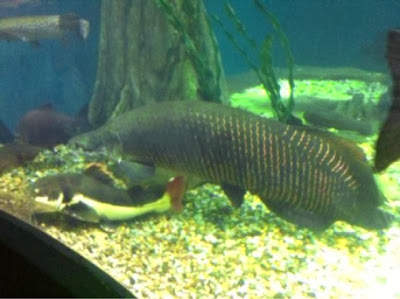 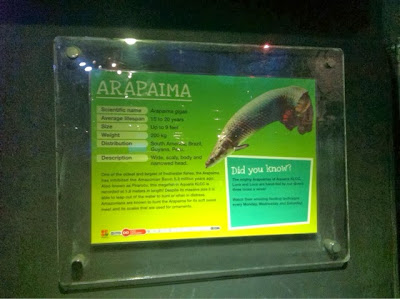 They have 2 of these fishes in that tank. Seriously, it’s big, really big. 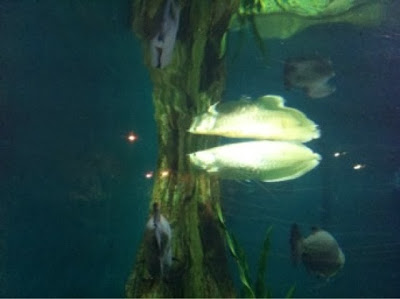 Spotted a silver arowana too.
While moving to another section with preview and info on sharks, heard a commotion going on. By the time I got there, the show was over. Shark feeding time was over!!! T.T
Saw this behind the glass instead. 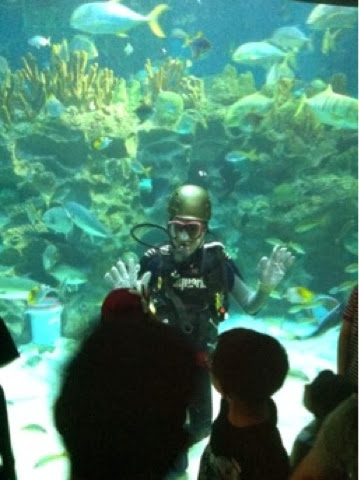 The divers became the attraction? 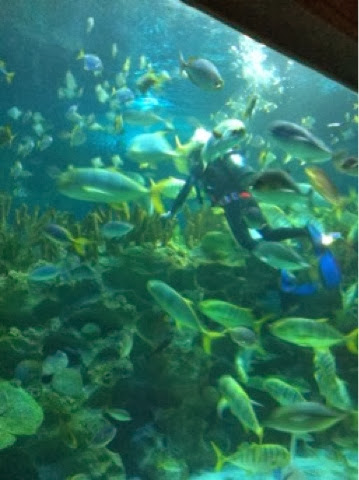 After all the photo-op, it’s time for the divers to retreat while I just went back to pick up from where I left.
That’s not the end of Aquaria KLCC tour yet. Part 2 coming soon… The reason that made Aquaria KLCC such an attraction.