New friends as well. So this is what they say that when traveling backpack style can really meet new people. Well, provided that you are friendly and open to conversation from people and brave enough to be thick face to ask or start a conversation. However always remember what your mother has taught you – Do not talk to strangers and added my own – that you feel uncomfortable with. Gut feeling is very important when you are practically on your own or in a place not of your turf. Pray and ask from God for discernment and heighten in observation skill would be better and a plus point.
Will be breaking down this trip to an event basis since there were too many pictures and event happened in a day.

Mentioned earlier that 2 flights in a day is not uncommon anymore. Bought and pre-planned for the trip 6 months ago when AirAsia had one of their lowest fares promotions. In total our flight fares cost us around RM350 each. But later on when it was nearing flying time, there were a few of our flights rescheduled.
Our journey started in the morning from Kuching International Airport. The long awaited time to finally get myself on the plane again. 4 months is not that short nor that long.

Then reached Kota Kinabalu International Airport -Terminal 2. The journey took us about 1h 25m. I have finally stepped foot onto Sabah soil. Another location strike off my Malaysia tour list. Those minutes spent in the plane was not a pleasant experience. Not being judgmental or anything but sitting beside me was a perverted looking man. He was always looking my way thinking that I did not notice and making grandfather sound throughout the flight. I had to keep my cool and have a poker face until I got off the plane. Eww…. geli…

Kota Kinabalu was only our transit point to Clark. Waited in the airport while sorting out some stuff and getting our currency changed. No more pesos in the terminal. 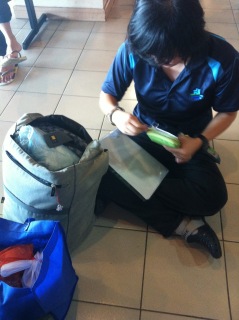 Had some minor detour in the terminal since I could not print out the boarding pass. Blessed indeed to be able to print the passes from the kiosk. From my experience with AirAsia’s kiosk, once you have checked-in, the pass could not be printed out anymore through the kiosk, only through printing and before this another option of mobile scan. Hung around the airport while passing time. Nothing much to do in the airport anyway. Smaller that LCCT, KLIA.

Pass through the immigration without any hassle and boarded the plane. Quite a number of people flying to Philippines as well but not a full load though. 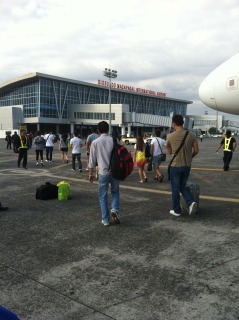 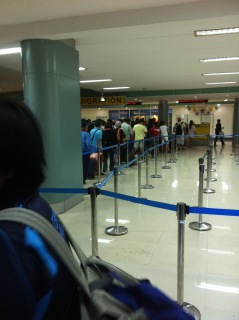 Immigration line was so long that we only got out after almost an hour. Another adventure in store. Find out what happened when in line to get that stamp in the passport.

–want more detailed or just summary? comment below if not I’ll just do short summary-